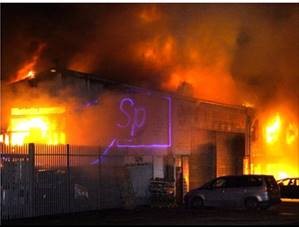 The ‘arrogant’ boss of a fireworks factory where two people perished in a blaze has been jailed for 10 years.

Richard Pearson, director of SP Fireworks of Stafford, was found guilty last month of causing the deaths of a work colleague and customer in the blaze in October 2014.

Pearson had denied both charges after attempting to blame others for what happened.

At Stafford Crown Court, Judge Michael Chambers QC insisted this was ‘not a case where remorse loomed large’ and the defendant had ‘given the impression of being rather arrogant’.

Sentencing Pearson, the judge said: “You have known your true culpability from the start, yet you have chosen to falsely blame others.

“Despite being very knowledgeable about fireworks and the risks they pose, motivated by financial profit, you have demonstrated an arrogant recklessness for the safety of others in the storage and handling of dangerous fireworks”

The judge said Pearson had chosen to ‘deliberately flout the regulations and fundamental safety requirements on a grand scale’, adding that he was ‘clearly aware of the risk of death arising from your negligent conduct’.

Pearson had received a large delivery of fireworks three days before the tragedy. After the fire the Police and Trading Standards discovered 488 boxes could not be accounted for and it was likely that the vast majority of those were at the store, breaching the regulations for storage and safety.